I never thought that I would become a remote worker. If you had told me that last year - my answer would probably have been something like “Remote what?” Oh yeah, that crazy lifestyle my brother lives, yeah right.”

And here I am!

I’m now one of the team mates behind Remotive along with Rodolphe, Jeremy and Alfred, and I almost earned my “remote worker” badge!

Yes, I’m one of those people working from home, organizing my days the way I want to by managing my own time, and making sure I stay productive along the way. 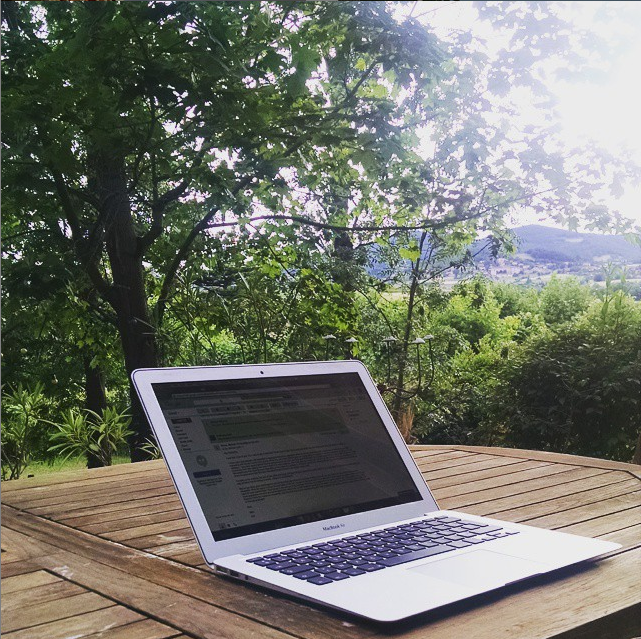 All I need is my laptop, and an Internet connection.

My brother asked for my help on Remotive in January 2015.

He needed a bit of assistance to get Remotive’s operations running, since his job (Business Developer at Buffer) is demanding quite a lot of focus.

I immediately jumped on board: the idea of building a community of people around a central topic, and sharing pieces of advice that can help thousands out there was so exciting!

I started to research and learn more about Buffer. Not only because my brother is part of the team, also because I use Buffer everyday for Remotive's community management. They have employees from all over the world who connect with each other throughout e-mails, Google hangouts, Skype calls ...

When Rodolphe talks about his job, it always seems to me that there's a strong bond between him and his colleagues. I mean an actual bond, stronger than what you usually get to see in most companies.

With a bit of curiosity I wondered “How can they actually connect with each other since they rarely meet in real life?”.

Not to assume that it’s impossible to have a connection with someone only through the internet - it's more that I sense it could be more natural to connect with someone when you get to know them in person.

I don’t know if Buffer shared the same thoughts, yet they managed to organise something absolutely amazing since Leo and Joel (the two founders) started their company. Twice in a year, the WHOLE Buffer team meets in a place in the world, that was voted by the team.

This year’s pick was Iceland, and it was two weeks ago.

Guess what? I was in Iceland two weeks ago!

I decided to fly to Reykjavik for a 4-day stay to see the Retreat “from the inside”.

Rodolphe (along the whole Buffer crew) went to Sydney earlier in the year, and to New-York the year before. He’d be telling me about meeting his working mates in person and how amazing it was.

First of all, it felt that the compulsory rule at Buffer is smiling :)

While waiting for Rodolphe in the lobby of the Hotel, I got to meet a few Buffer members. They immediately asked me many questions as I raised a bit of curiosity being Rodolphe’s brother.

It was amazing to see how these people are very interested by everything, and how welcoming they were even though they didn’t know me at all.

The amount of positivity each everyone had is nothing I’ve seen before... Especially not at “work”.

One should witness the moment they finally get to see each other again, or for a lot of them, to meet for the first time.

Do you know that feeling when you haven’t seen that family member you for a while and he/she lives really far away? And when you pick them up at the airport, you both go through a very long hugging phase (Approximative length, about 17 seconds).

That’s what happens in the Retreats. “It’s so exciting to see the evolution of the relationship between us ! First we get to exchange e-mails... Then we have our first conversation through the computer, and eventually we jump on Skype video calls. But how amazing is it to finally get to meet each other in real life !”

For a few of them, it was the first Retreat. And yet it didn’t seem like it was.

Lots of smile, jokes, laughter in the air.

Everything was organized perfectly.

Dining rooms were rented for a buffet (which included a great speech I was lucky to witness by Joel and Leo) to gather everyone. Each one of them was at ease it their own rented appartement. Many activities were scheduled throughout the week (horse back riding, rafting ..).

And don’t get me wrong, the Buffer team was still here to WORK. Even though it’s a joyful time with lots of sharing moments, the whole team came to connect with each other, but they wouldn’t stop working either...

For an entire week, they rented a Cyber-Cafe space in order to have the whole team working together as a group. (Should I mention that they also had a Counter-Strike LAN party ..?)

It’s quite an experience for a Remote team, to work side by side.

They usually spend the rest of the year working behind their computers at home.

During the stay, the group of over 40 people is free to either gather to explore, or do their own thing. Everybody’s free to “roam” as they wish, but it’s interesting to notice how they naturally connect with each other. I sensed that Joel and Leo made everything they possibly could to make everyone feel happy.

And it totally made sense.

Isn’t it way easier and natural to be productive when you feel like the company you work for is some kind of second family ?

I guess the answer to that is quite easy.

I don’t have scientific proof proving that you’ll be way more productive in a sphere of people you enjoy and trust, rather than working with people you haven’t had time to properly meet and got to know.

It appears that retreats strengthen the bond between the members of the team. From the outside, they seem much more like team members than “employees from the same company”.

I don’t know where the next Buffer Retreat will be held.

But I might as well swing by for a few days to say Hi!

I got to meet amazing and inspiring people out there, and I don’t regret a second jumping on a plane to Iceland.

To sum it all up, it was true.

It’s not only on Twitter or through blog posts or else.
Those people are really a 100% welcoming, positive, open-minded.

The amount of positive feelings all these guys share together has to be a main component to the success of the Buffer company.

I tried to photograph a frown but I just failed ;-)

Actual bonds betweens co-workers should never be under-estimated, since it tends to accentuate productivity, and make you feel better in your "everyday life" at work.

Special thanks to Andrew Yates for letting me use few of the pictures he took during the retreat :)

Join 8,000+ Remote Workers by Subscribing to Remotive's weekly emails below:

We're delighted to share the story of an inspiring Remote Worker and Remotive reader, here is Aline's story: 1.- Can you please tell us a bit more about: Who are you, and

Rodolphe - This article was written by Amanda Kendzior for Remotive Blog, she shares with us her experience as a Remote Working mother - Enter Amanda: Last year, as a brand new mum,

Remotive Blog
—
Buffer Retreat in Iceland : From The Inside
Share this